Each app must be bundled as a zip archive (commonly used with the suffix .wave) consisting of:

You can quickly create a .wave archive by running h2o bundle in your app git repository (see the CLI section)

Each app archive has to contain an app.toml configuration file in the TOML format, placed in the root of the .wave archive, example:

The platform executes each app in an environment given by its RuntimeVersion. The RuntimeVersion determines the OS, Python version, location of the app code/venv, etc.

Developers can also specify the pip-managed dependencies of the app via standard requirements.txt (can contain references to .whl files included in the .wave using paths relative to the archive root)

Developers can also specify the OS-managed dependencies of the app via packages.txt in a format similar to requirements.txt: one package name per line. These will be installed as given using the package manager given by the RuntimeVersion (e.g., apt-get install).

Developers can further customize the runtime environment by Utilizing Secrets.

The platform does not currently provide any provisions for developers to customize the OS and Python versions beyond choosing a specific RuntimeVersion.

We are actively working on improving this.

When running in an actual App Store deployment, each app instance will be configured with several standard environment variables specifying its context (these might be empty when running locally, e.g., via h2o exec), including:

Updating App To a Newer Version​

The "Catalog" page shows apps with visibility ALL_USERS, so rolling out a new app version is done by:

This is based on the Basic Concepts:

Apps are mostly immutable, meaning once uploaded, they cannot be changed (except for visibility). To "update" an app, one has to upload a new version.

Internally, AI App Store treats every app name/version combination as a separate entity. The UI then uses the app name to link several versions together; however each can have different title, description, owner, instances, etc.

Developers can pass secrets registered with the platform to apps, exposed as environment variables using the [[Env]] section within the app.toml or as files using the [[File]] section. Each specific value from the secret that you want to use in your app needs its own environmental variable or file path.

This lets developers link their apps with external dependencies (e.g., S3, Driverless AI) securely, while allowing easy overrides for local development or deployments outside the platform.

The h2o secret list command will let you see a list of secrets available to be used by your apps. The optional -v flag will filter based on PRIVATE and ALL_USERS.

The app routing mode (Runtime.RoutingMode in app.toml) determines how the app instances' UI is exposed to end users. The currently supported values are

In both cases the app's webserver gets the full request URI as received by the Appstore server.

Redirects: The Appstore server's app router component implements a redirect (via 307 TemporaryRedirect HTTP status) in case an instance is accessed via the wrong URL, i.e. it redirects from sub-path to subdomain for instances with DOMAIN RoutingMode and vice versa for BASE_URL.

While it is not a strict requirement, since the platform deploys each app with its own Wave server, we advise that apps use / as their main route:

You can leverage App Aliases to give your instances pretty URLs, so that instead of 8184-810243981-23.cloud.h2o.ai your users can access the instance via something like my-pretty-name .cloud.h2o.ai.

Prerequisite: You must be an admin of the environment to run these commands.

To create a single alias for an app for which you want to have a pretty URL, run:

This instance then can be accessed via my-pretty-name.cloud.h2o.ai, accesses to <instance id>.cloud.h2o.ai will result in an HTTP 302 redirect to the alias.

When you’ve created a new app instance, usually because there’s a new version of the app, you may want to change which instance the alias points to. To do this, run:

Note that there can be a slight delay before the change gets propagated.

See the CLI documentation for details on these commands.

Please note that if the environment requires base URL app routing for all apps, you will need to add this alias to the App Store TLS certificate.

The App Store allows importing apps that do not bundle executable code (and thus cannot have instances) but only represent a link to an external website. This kind of app is referred to as a "Link App". The goal is to inject an external link into the App Store UI/CLI in a way that is consistent in terms of UX with regular apps (app icon, listing on App Store page, categorization, app details with long description and screenshots, etc.).

You can create a link app by setting LINK as the value of App.InstanceLifecycle in app.toml. In such a case, you also need to set the Link.Address value to a URL of your choice. The UI and CLI will then direct users to this URL instead of directing them to an instance of the app.

A link app bundle still contains app.toml and static/, but should not contain any source code or requirements.txt.

A link app can leverage all the parameters in the App section, however the Runtime and File sections must be empty. For example:

App Configuration with the User Interface​

While tags and visibility for an App can be configured via the CLI, these attributes can also be set using the user interface, as described below:

Since the user interface is being continually improved, it is possible that the images below will not match exactly what you see in your version of H2O AI Cloud.

On the "My Apps" page, click on the pencil icon for the app you wish to edit: 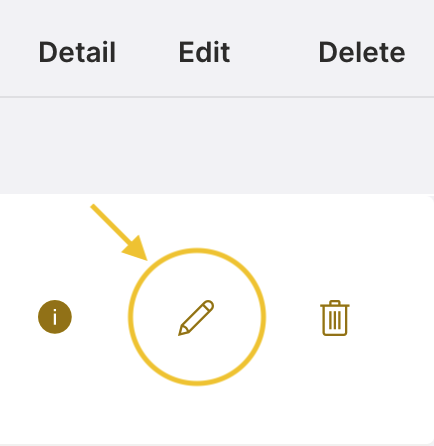 This will bring up a panel on the right side of the user interface which will allow you to edit the values for: 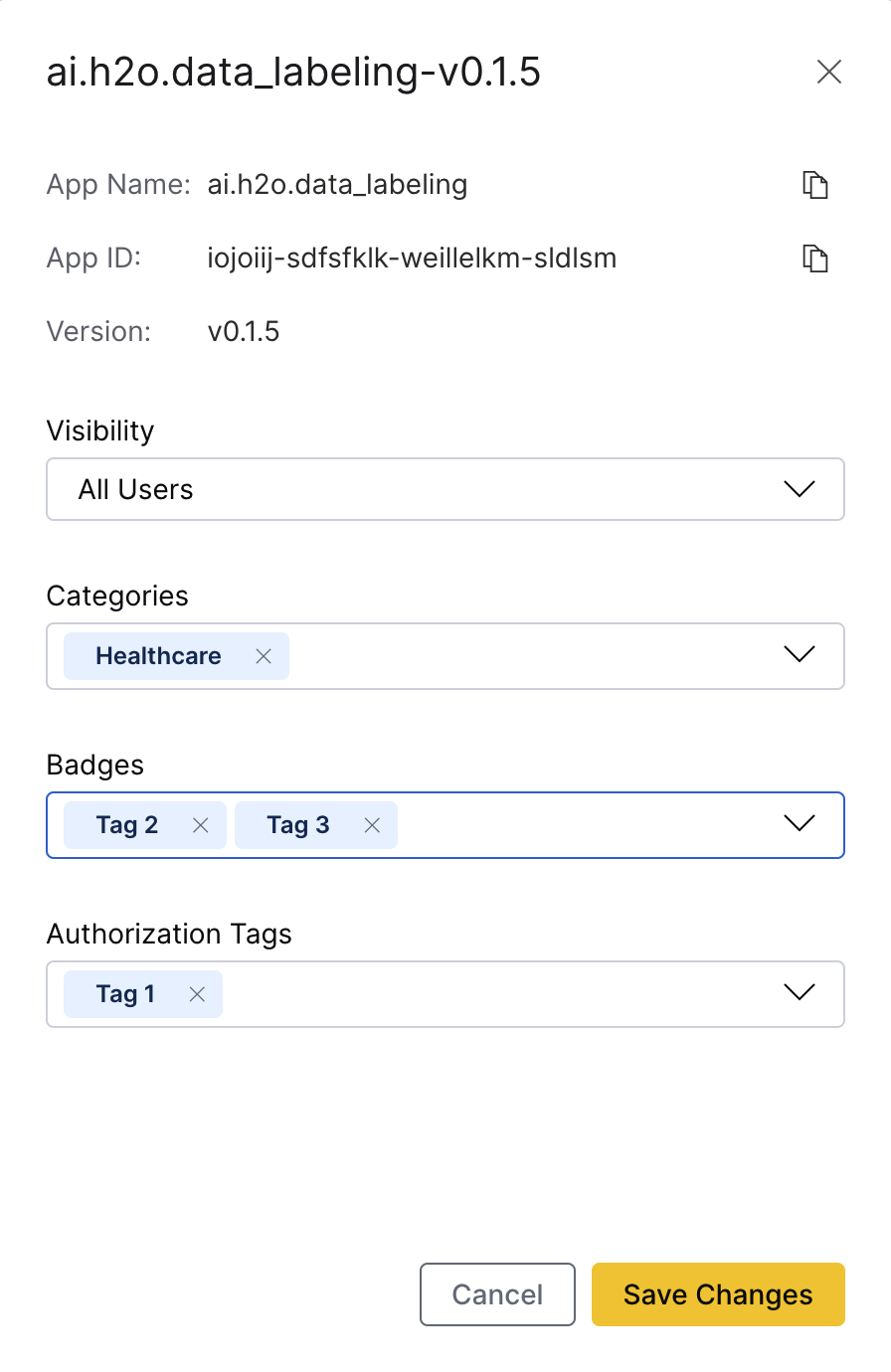 Tags will show up in the "Categories", "Badges", or "Authorization Tags" select menus based on the following criteria: